One of the five oldest companies in the United States, Deere & Company is the world’s largest manufacturer of agricultural equipment and a major U.S. producer of construction, forestry, and lawn and grounds care equipment. The company has factories throughout the world and distributes its products in more than 160 countries through independent retail dealers–nearly 5,000 worldwide. It is also active in financial services–retail and lease financing and insurance–and provides health care benefit management services to nearly 900 companies and government agencies in eight states. Deere has been an industry innovator since John Deere introduced the first successful self-cleaning steel plow in 1837. At that time, most Americans lived on farms; now many of Deere’s customers belong to the upper five percent of the nation’s farmers, who take in 80 percent of the net farm income; these farmers run big farms that need sophisticated equipment. 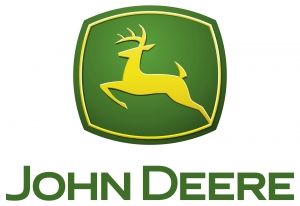 Born in 1804 in Vermont, John Deere was a blacksmith renowned for his craftsmanship and inventiveness. After a business depression in the 1830s, Deere, like many young easterners, migrated west. He settled in Grand Detour, Illinois, where his blacksmith business thrived. He soon saw that the cast-iron hand plow that pioneers had brought from the East did not work well in midwestern soil, which clung to the plow’s bottom and made it necessary for the farmer to scrape off the soil every few feet. Deere developed a plow with a polished and specially shaped moldboard and share, which scoured itself after lifting the soil. 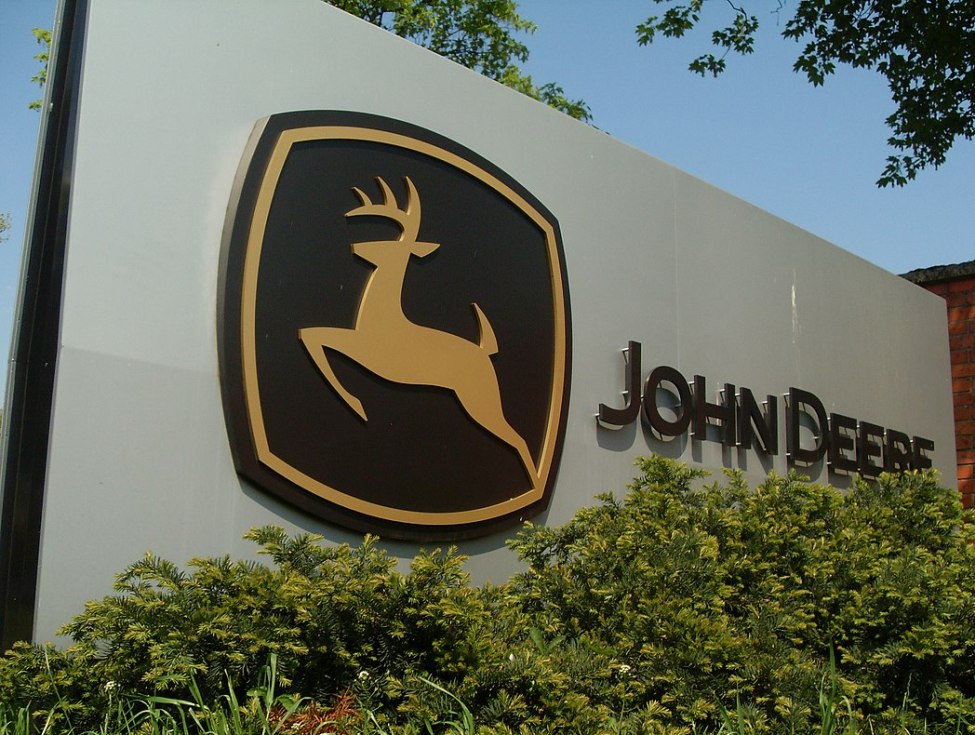 This first plow was made from a broken sawblade, but the tool quickly became so popular with Deere’s customers that he began to make plows before he got orders for them–a revolutionary practice in those days. In 1843 Deere ordered a shipment of rolled steel from England. This move enabled him to expand his business, and three years later, he was able to get steel made to his specifications from Pittsburgh, Pennsylvania mills. In 1847 Deere moved his business to Moline, Illinois, near the Mississippi River, which provided water power and convenient transportation. By 1850 he was producing 1,600 plows a year.

Known to say, “I will never put my name on a plow that does not have in it the best that is in me,” Deere continued to improve his plows and to tailor them for different soil conditions. In 1868 the business was incorporated as Deere & Company. In 1869 Deere named his son, Charles Deere, vice-president and treasurer of the company. When John Deere died in 1886, Charles succeeded him as president.

Charles Deere focused on the company’s distribution system, establishing wholesale branches to market and distribute Deere equipment to the independent dealers who sold it. The product line was also expanded. The Gilpin Sulky Plow, launched in 1874, had the capacity to plow three acres in 12 hours, and in 1898 the new Deere Gang Plow, which used four horses instead of three and could plow six acres in 12 hours, was introduced. In the early 1900s, Deere plows were powered by steam engines. By the time Charles Deere died in 1907, the company was manufacturing a range of cultivators, steel plows, corn and cotton planters, and other tools.

Grew through Acquisitions in the Early 20th Century

William Butterworth, a son-in-law of Charles Deere who was responsible for bringing together under the John Deere name other farm equipment companies with whom Deere had done business, became the next president, in 1907. As president, Butterworth engineered the 1911 acquisition of the Van Brunt Manufacturing Company of Horicon, Wisconsin, which produced the first working broadcast seeder and grain drill. Also in 1911, Deere & Mansur Works, which had been established in 1877 by the company to make corn planters, was merged with Deere, as was Joseph Dain’s hay-making tool company. In 1918, Deere bought Waterloo Gasoline Engine Company in Waterloo, Iowa, one of the first makers of tractors.

During World War I, the demand for food motivated many more farmers to begin to use tractors, and agriculture gradually lost its dependence on animal power. Deere sold 8,000 Waterloo Boy tractors in 1918. In 1823 Deere introduced its own tractor, called the Model D. 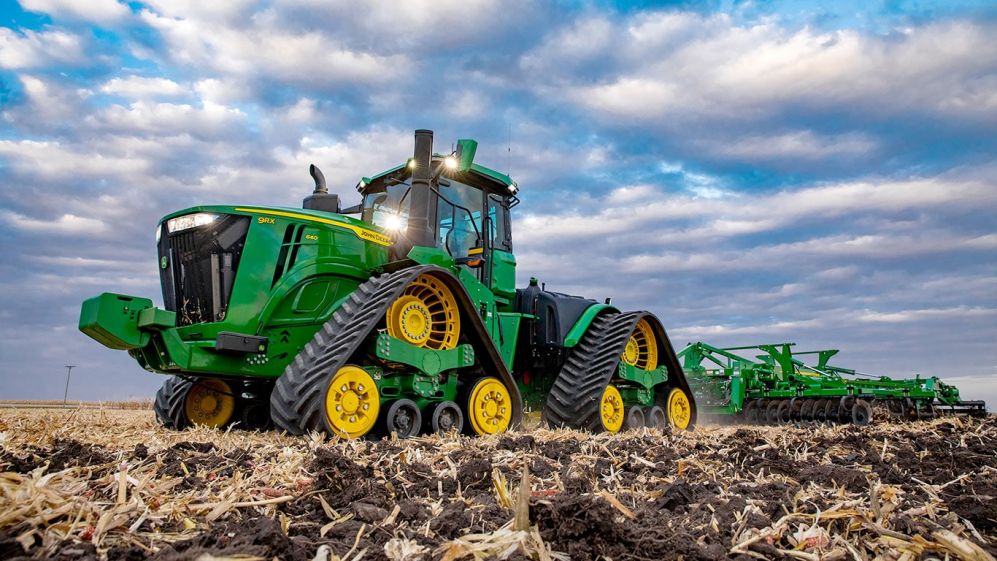 In 1928, Charles Deere Wiman, John Deere’s great-grandson, became president of the company. Wiman concentrated on engineering and product development, and the company grew rapidly. In the 1930s, when the John Deere Combination Unit was introduced, the farmer could bed, plant, and fertilize cotton ten times faster than four men with four mules. The four-row tractor corn planter allowed one man to plant and fertilize between 40 and 50 acres a day. In 1937, despite the Great Depression, Deere reached $100 million in gross sales.

During World War II Burton F. Peek was president. Peek served during the two years that Wiman held the post of colonel of ordinance, in Washington, DC. Peek and Wiman, when he returned to Deere, continued to focus on innovation in product design, and by the end of the war Deere was a leader. In 1952 Deere was the first farm equipment manufacturer to modify the self-propelled combine for picking and shelling corn. Three years later, Deere was one of the 100 largest manufacturing companies in the United States.

After Wiman died in 1955, his son-in-law, William A. Hewitt, became president and CEO. He led the company into a major growth period. Seeing that Deere’s decentralized operations needed to be coordinated, Hewitt accomplished this by increasing communication between different branches of the company. He also promoted Elwood Curtis, Deere’s controller, to vice-president.

During the mid-1950s, while Deere’s competitors were expanding abroad, Hewitt seized the opportunity to manufacture overseas. In 1956 he sent one of Deere’s factory leaders, Harry Pence, to look for possible acquisitions overseas. The first was a small German tractor company called Heinrich Lanz, which was in financial trouble and could be bought cheaply. Other acquisitions or plant constructions followed in France, Spain, Argentina, Mexico, and South Africa. For 15 years, overseas operations suffered huge losses due to managerial mistakes and unforeseen problems in start-up activities and in foreign exchange, but Hewitt believed the company had to expand internationally or risk being forced out of the market. Deere continued to expand in Canada, Western Europe, and Latin America.

In 1957, Hewitt hired Finnish architect Eero Saarinen, the designer of the Gateway Arch in Saint Louis, Missouri, to design a new headquarters building that would belie Deere’s provincial, rather conservative image. The new building was completed seven years later in the same Moline location, and it became a tourist site, particularly attractive to farmers.

Hewitt diversified and expanded Deere to help balance the company’s farm equipment operations. Since tractor sales were dependent on the income of farmers, sales fluctuated according to weather, agricultural prices, and government policy. Although agricultural machinery still accounted for most of Deere’s sales, in the late 1950s, Deere began to make machinery for construction, along with equipment for street and road maintenance and logging. In 1963, the company began to manufacture and market lawn care and garden equipment. This branch of the company grew rapidly. By 1969, there were 3,700 independent John Deere dealers in the United States and Canada. In 1969, through the dealers, Deere began to operate a network of John Deere parts and service centers.

Although the 1960s were a decade of growth and diversification for Deere, it was also a turbulent time. Earnings decreased markedly in 1966 and 1967, mainly because of overseas operations. In 1968, the company suffered losses due to unfavorable weather, low crop prices, and a six-week strike. The United Auto Workers (UAW) demanded a contract from Deere similar to the one it had won at Caterpillar Tractor Company, one of Deere’s competitors. Deere refused, and the strike finally ended when the UAW proposed an inverse seniority plan, which gave senior workers up to 95 percent of their pay if they volunteered to be laid off for one year. This allowed older workers, who were closer to retirement, to take time off while collecting UAW supplemental unemployment benefits. The plan went into effect in late 1967, and in three years Deere laid off 1,698 people, about 70 percent of them with high seniority. 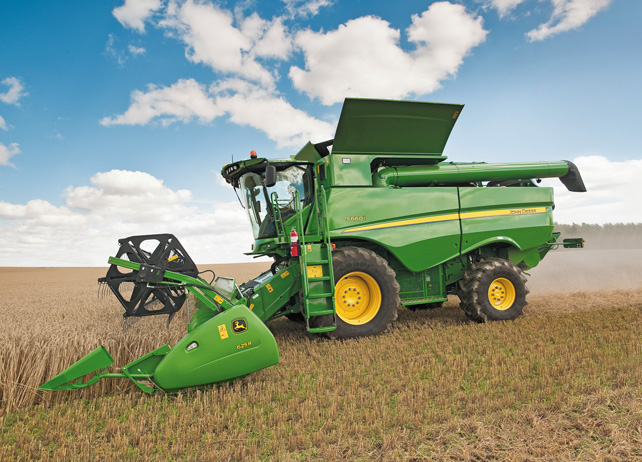 Throughout the 1960s, Deere expanded its lawn-and-garden product line to include snowmobiles, hand tools, portable heaters, lanterns, chain saws, and other products. In 1972 Deere introduced the John Deere bicycle in an effort to take advantage of a rapidly expanding market. This was also the first year Deere made a profit overseas, as the demand for farm machinery increased both within the United States and abroad.