Named after Seattle’s first woman mayor, Bertha is what is known as a soft rock TBM, as opposed to a hard rock TBM. The latter, as the name suggests, is essentially a big rock drill designed to bore through solid granite or something equally nasty. That’s not to say that Bertha had an easy time of things. Far from it. Soft rock TBMs have to contest with sand, which can be as damaging to machinery as rock, as well as gravel, clay, loam, and the odd boulder or other surprises. 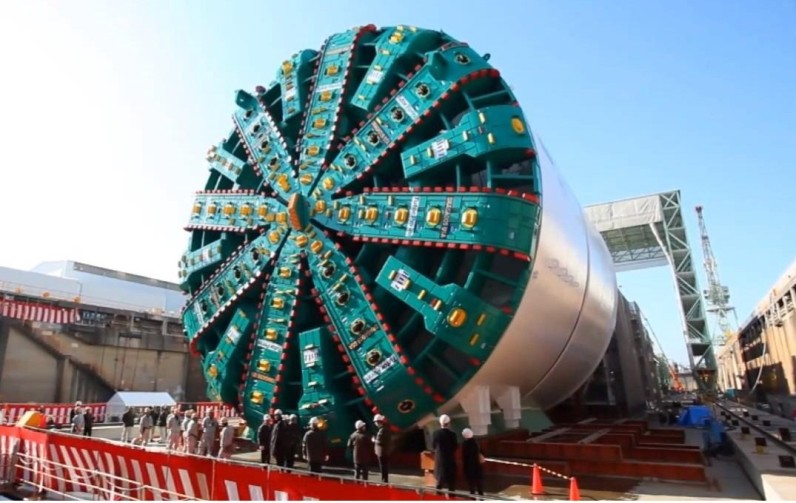 Bertha had a particularly hard time because the Seattle area was formed hundreds of thousands of years ago by a series of glaciers pushing too and fro during the great ice ages. This pushed up massive hills of debris made of eight different kinds of soil under the city center. In fact, the soils are so varied that across the face of the digging machine the soil types could vary radically. Worse, the line of the new tunnel runs from the waterfront, where Bertha was below the waterline, up under the city through 10 distinct geological zones to come out of a hillside, where the soil is bone dry.

It also didn’t help that after a century-and-a-half of building, Seattle is a warren of foundations, pilings, cellars, sewage lines, railway tunnels, road tunnels, and pedestrian tunnels. And then there’s the famous “underground city” that was buried and built upon after a fire devastated the city in the 19th century. Even before tunneling began, old deposits of fill soils had to be removed and areas strengthened to withstand the passage of the TBM. 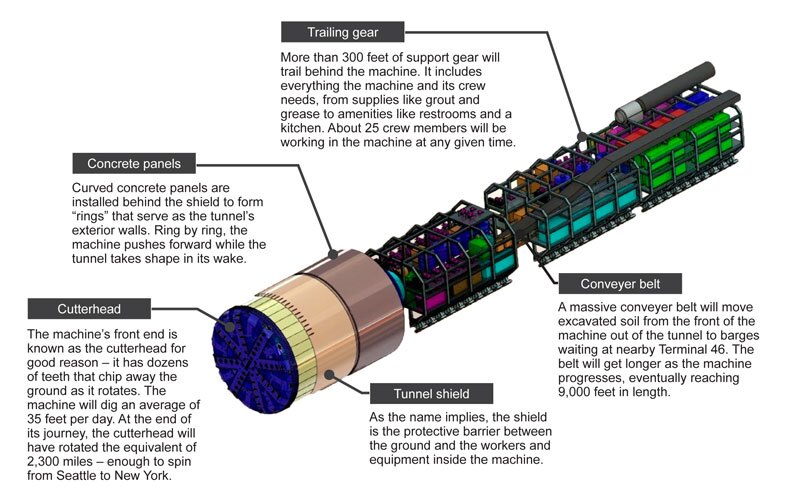 On April 4, the world’s largest tunnel boring machine broke through to the open air after almost four years underground. Called Bertha, the giant digger was tasked with the challenge of building a tunnel large enough to carry four lanes of motor traffic under the heart of Seattle. The story of how it made the 1.7 mi (2.7 km) journey under the skyscrapers of the port city is not only a tale of a remarkable machine, but also of civil engineering, geology, politics, luck, and proving the old adage that anything that can go wrong, will.

Bertha’s journey started not in Seattle, but in Nisqually, Washington, about 60 mi (100 km) south of Seattle. On February 28, 2001 at 10:54 am, the rural community was the epicenter of a magnitude 6.8 earthquake that rocked the region. Now known as the Nisqually or Ash Wednesday Earthquake, the tremors wreaked havoc on the cities and suburbs to the north.

But one thing that was hit hard by the quake was the area’s infrastructure. Inspections showed that most of the bridges in the Seattle area were inadequate to withstand another such tremor and a crash program was initiated to retrofit all the bridge piers with concrete sleeves as reinforcement. It was expensive, but it seems to have done the job, with one exception – the Alaska Way Viaduct.

A fixture of the Seattle waterfront since the 1950s, the Viaduct was a two-tier elevated roadway that is one of the major north/south arteries of the city, carrying tens of thousands of commuters and goods lorries each day on a scenic route along the waterfront. It had suffered a moderate amount of damage in the quake, but engineers assessed that there was no point in making the extensive repairs needed because the structure was too dangerous.

The basic design was too light and, instead of sitting on a solid foundation, the support piers sat in a bed of alluvial redeposit soil. Though the worst was repaired, the experts concluded that another earthquake could cause the Viaduct to pancake, as happened in 1995’s Great Hanshin earthquake in Japan. The question was not whether to tear it down, but when and what to replace it with. 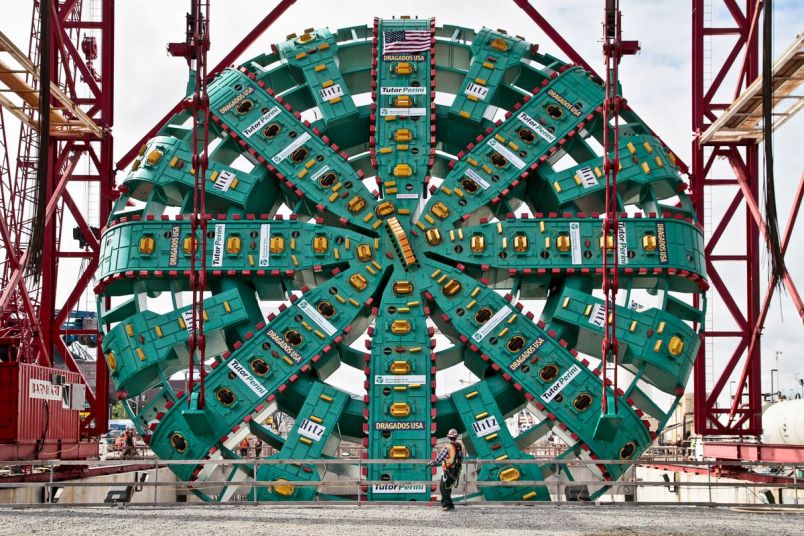 What followed was almost eight years of debate, deliberation, hearings, and flatout arguments. Some people wanted to replace the old Viaduct with a new one to keep things as they were. Others felt that the Viaduct cut off the historic waterfront from the rest of the city and turned the area under it into a gloomy underworld. Some advocated replacing it with a cut-and-cover tunnel. Others wanted a surface-level roadway. And the unabashedly anti-motor car types wanted the Viaduct torn down and not replaced at all.

In all, over 90 proposals were looked at, but in January 2009 the state and city governments announced a new project by the Washington State Department of Transportation (WSDOT) and Seattle Tunnel Partners – a partnership of Spain’s Dragados and Tutor Perini in the US. In this, the Viaduct would be demolished and north and south stretches of State Route 99 would be reconnected by a US$3.1 billion tunnel that would run away from the waterfront, the line of the Viaduct, and the Battery Street tunnel that linked the Viaduct and the north end of the roadway.

The tunnel would run under the city center at a depth of 200 ft (61 m) to avoid a forest of pilings, cables and pipes from some 160 buildings above. Meanwhile, the waterfront’s seawall, which was also inadequate, would be rebuilt and strengthened. This latter project was a tricky job in itself because the area is made up largely of redeposited soil from harbor dredging and is the home of several historic warehouse piers that are now major tourist attractions, the Seattle Aquarium, an active ferry port, a hotel, and a cruise ship terminal. It was thought that the tunnel would be least disruptive. 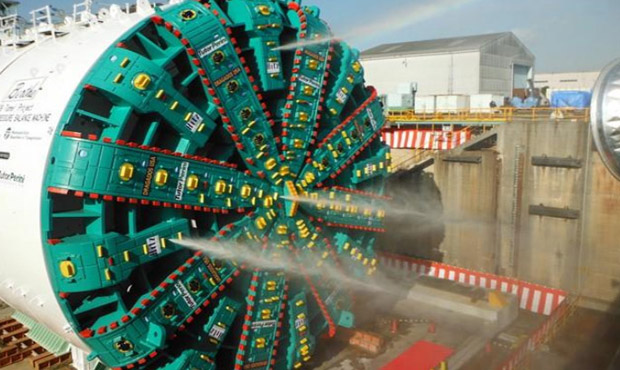 All this may sound straightforward enough, but to replace a roadway with as much traffic as SR 99 carried on a daily basis with a deep tunnel was unprecedented. It was not only deep, but the plan was for it to be 1.7 mi (2.7 km) long, and wide enough to hold a two-lane double decker road, ventilation and fire-fighting equipment, and an emergency pedestrian walkway concealed in one wall.

When put back together, the WSDOT invited New Atlas and other members of the media to tour inside Bertha – and that in itself is an indication of just how large it is. Most digging machines are things you look at from the outside, but the Seattle TBM is so large that it’s like a cross between a gigantic locomotive and a cylindrical factory 322 ft (98.2 m) long. Instead of a solid piece of machinery, it’s filled with catwalks, ladders, and stairs. It even has a control room inside, as well as a pair of break rooms. Remarkably, despite its size, Bertha is largely automated and only needed about 25 people to operate it at any one time. 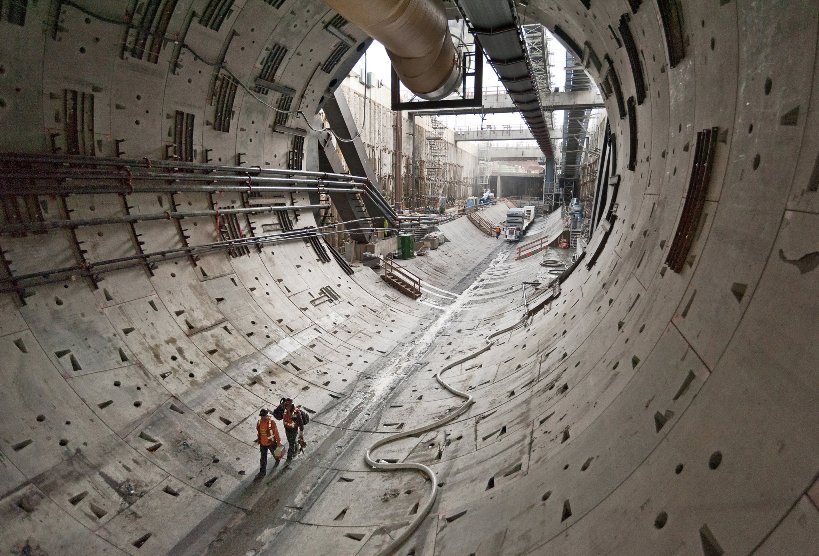 The working head of Bertha is the cutterhead, which completely covers the front of the machine. It weighs a massive 2,132 tonnes (2,000 tons) and is covered with 260 steel teeth designed to break up soft soil and guide it through gaps inside the cutterhead, or grind up large boulders. Many even rotate to be replaced by other, different teeth as the job requires. This is turned by a 25,000 bhp (18,600 kW) electrical system and allows the cutterhead to rotate at up to 1.2 rpm and the machine moves forward at a speed of about 35 ft (10 m) per day.

Directly behind the cutterhead inside the machine is the slurry pipe. This is a steel tube about 3 ft (1 m) in diameter that has a very important function. Without it, the slurry coming from the cutterhead would blast into the digging machine with five atmospheres of pressure behind it. Instead, the pressure is reduced until the slurry can pass safely through it impelled by an Archimedean screw onto a conveyor belt, which sends the soil back to the end of the tunnel and out to a waiting barge on a nearby pier. This expandable conveyor is joined by thousands of feet of cables and pipes to supply Bertha with power, water, conditioner, and other essentials.

Instead, Bertha is currently being dismantled in the pit at the north end of the tunnel, which will afterwards become part of the ramp connecting with the motorway. The cutterhead and shield are being cut up into pieces smaller than 20 tons (18 tonnes), so they can be taken away by road, and most of the steel used to build the machine will be taken to a local iron foundry to be melted down to build the fittings inside the tunnel. As for the motors, pumps, electronics, and the rest, they will be sold back to Hitachi.